Sleeve Notes:
The band was formed in 1939 and has an impressive record of successes in the competitive field at Championship Grade level. At the Edinburgh International Festival during the years 1965-67 it was placed first on the three occasions. In 1968 and 1969 it gained the runners-up position in the Grand Finals of the B.B.C. BAND OF THE YEAR competition at the Festival Hall, London. It was successful in winning the title BBC BAND OF THE YEAR in 1972. It has registered significant successes at Belle Vue, Manchester, Royal Albert Hall, London, Cardiff, Leicester, Nottingham and Wolverhampton in the British Open Championships, National Finals and Regional qualifying events. In 1964 it was the first British brass band to tour Eastern Europe. Concerts were given in Prague and other towns in Czechoslovakia during a nine day visit. Recordings were made for the Czech Recording Authority and the band was featured in a joint concert with the central band of the Czechoslovak Army which comprised 150 musicians. The band is fortunate in having a lively and equally successful junior aggregation under the title of City of Coventury "B" Band. In this way the senior band is assured of a flow of new, but seasoned, players to fill any vacancies which might arise. Its Musical Director was born at Rugby in 1917. He has made a concentrated study of the piano, violin and trombone which led to diploma standard of performance on all three instruments. He has a successful career as a player in dance orchestras, military and brass bands, and the live theatre to his credit. In addition to his heavy involvements with the band he is Head of Musical Department in aWarwickshire school and tutor at Coventry College of Education. During recent years he has been in increasing demand as an adjudicator. The band is firmly established as a concert attraction of the highest order and its sights are set on its three-hundredth broadcast appearance.

Program Notes:
Side 1
MARCH: THE PRESIDENT (German) This opening number with its stirring and easy flowing tune has long captured the enthusiasm of brass bandsmen and their concert audiences alike.
CARMEN SUITE (Bizet, arr. Wright; Meilhac, Halévvl Georges Bizet was born in Paris in 1838 and died near there in 1875, aged thirty-seven. The now popular CARMEN is a Spanish gipsy opera. The action takes place in and near Seville, the period being about 1820. Its success was not immediate and the composer died a month or two after its first performance in 1875. The tunefulness and delicate, piquant orchestration of Bizet are very attractive, and in this work, at any rate, he shows dramatic power.
ROMANZA (Geehll TROMBONE SOLO: TREVOR HARGREAVES This attractive piece by one of the foremost composers of brass band music gives the opportunity to feature a brilliant instrumentalist who is one of the company of outstanding soloists in the Band.
THE MIKADO (Gilbert, Sullivan) The composer's lasting fame was won by his happy combination of a sense of fun, a sense of rhythm, and gifts for melody, easy-going yet apt harmony, and piquant orchestration. These qualities fully display them- selves in his setting of THE MIKADO .
Side2
PRINCE IGOR OVERTURE (Borodin, compl. & orch. Rimsky- Korsakov, Glazounov, arr. Barsotti) Alexander Borodin was born in St. Petersburg and died there in 1887, aged fifty-three. He wrote two symphonies, string quartets, piano music, and the opera PRINCE IGOR, left unfinished but brought to completion by his friends Rimsky-Korsakov and Glazounov. This transcription for brass band by Roger Barsotti is a major contribu- tion to the repertoire.
MARCH OF PARAPHRASE: MEN OF HARLECH (German, arr. Wright) Edward German's talents as a composer were, and still are, most appreciated in the theatre, especially because of the success of his light opera MERRIE ENGLAND. But he also wrote symphonies and other orchestral works, including a WELSH RHAPSODY from which this stirring march is taken.
BOBBIE SHAFTOE (Trad. arr. Maddison) This must be one of the best known tunes, having long been familiarly sung by vocal aggregations everywhere. One is not likely to find a male voice choir which neglects this pleasant piece.
TWO SONGS: LOVE SONG (Beethoven, arr. Bebb)
CREATlON'S HYMN (Beethoven, arr. Bebb) Among the massive output of Beethoven—-it would seem a lifetime's work for any ordinary mortal merely to copy out all his compositions, there are sixtv-seven songs. Two of these, the tender LOVE SONG and the profound CREATION'S HYMN have been effectively transcribed for brass band. 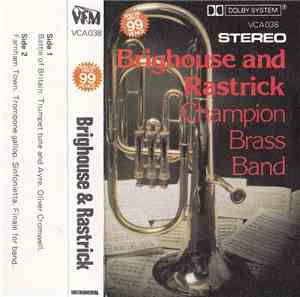